* The entry is open only to racers living in Niigata Prefecture.
The information below is for the 2020 KUSHIGATA WIND TRAIL 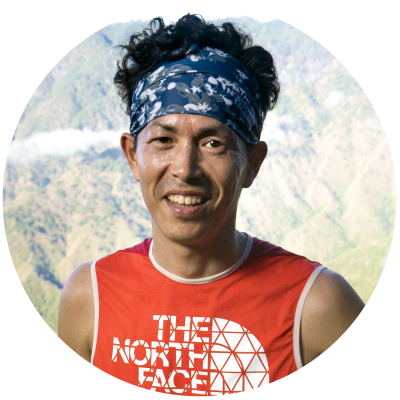 Father of three children. A professional trail runner. 『Do what I love as job and live freely』
Travel around the globe with a heart of appreciation and share that experience. Organizes or produces more than 15 races annually, including the World Series and the Asian Series, across the country.

Three races will be held. Please check the outline for details of each race.

The main race of this event. Covers almost the entire area of ​​the smallest mountain range in Japan, the Kushigata Mountains. Go back and forth on that ridgeline. You may expect that ridgeline would be easy to run, but as the name of the shape comb, KUSHIGATA, you must face to repeat the jagged up and down. Comprehensive skills such as climbing technology, descending technology, stamina and speed are required.

6.3 km out of 31 km is a paved road. Therefore, you gain nearly 2000m in 25 km. The first 2 km is a paved road. Then mountain section. First, warm up at Mt. Shiratori. However, the slope is steep and many large stairs. Once on the farm road, take a break at the 1st Aid station Haguro Parking Lot and finally the heart of the KUSHIGATA Mountains begin. Firstly, climb up to the ridgeline, including the rocky terrain.Then on the ridgeline, you see countless sharp up and down. The up and down may require strong mentality… But you know that’s trail running!

By the way, KUSHIGATA WIND TRAIL, hey, where is the wind?

This race hit by heat day once every two years. If it's hot, run fast to feel the wind! KUSHIGATA WIND TRAIL.

31km is a little too much ... but I feel like I can go if it is 18km. YES, This is for you! A round-trip course that follows the same course as 31km to 『Itairi-no Mine』at 9km.

On the way back, you must feel, is this same trail? It’s just you go down where you climb but looking completely different. I'm sorry for those who participated casually because of the distance 18㎞. Every year, after the goal, I heard many impression, this is not expected... The 18km trail is equivalent to 36km of flat road. Preparation is important. I wish you a happy finish, GOOD LUCK.

I'm just starting to run and I can't run in the mountains. But I want to feel the atmosphere of the trail race! I want to run a little while waiting for my family! This is just for YOU!

Roads and unpaved roads proportion is 50%. Take it easy, go around to see countryside.

Hey, elementary school students! I know, you do naturally sprint from the start. YES, go ahead. Do as much as you want!

For the 31 km course, 6.3km will be paved. Therefore, the accumulation altitude gain is about 2000m in 25km. Proceed along the jagged ridge, as the name suggests. I hope you can experience what the shortest spicy mountains in Japan are like. The Iide Mountains and the beautiful ridgeline beech forest seen from around the top of MT.KUSHIGATA are characteristic of the KUSHIGATA Mountains. Feel the fluffy trail.

Himalayas, Alps. There are huge mountains all over the world. The KUSHIGATA Mountains is the smallest in Japan. Even the highest peak, Mt. Kushigata, is 568m, but the intensity of up and down ridges is just the mountains, as the name of the KUSHIGATA. You can enjoy a stunning beech forest on the ridgeline.

Overall producer HIROAKI Matsunaga started the snowshoe race around 2013 in Tainai City where KUSHIGATA mountains are located. Then, he received a request from the city to produce a permanent trail running course. So, he suggested using the smallest mountain range in Japan, the KUSHIGATA Mountains. In 2016, the history of the KUSHIGATA WIND TRAIL begins as a full-scale trail running race in collaboration with Tainai city.

The site of the KUSHIGATA WIND TRAIL, Tainai City, Niigata Prefecture is an attractive area where the sea, mountains and villages are integrated around the Tainai River. Local products such as local beer, wine, ham and bacon made from clean water, and hot springs that make your skin slippery. Invite your family and friends to this place where there are many fun things to do besides the race.
・Tainai City Sightseeing Navigation http://tainai.info/
・Tourist inquiry Tainai City Tourism Association TEL +81-(0)254-47-2723